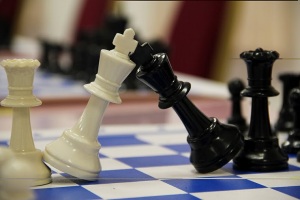 Life is like a game of chess. Never be too complacent with it. You will never know movement of which “pawn” will bring what consequences. Never overlook the movements of different pieces on chess board. A pawn can be a small tremor which you overlook at the beginning and the consequences of which will make you repent afterwards.

The strategies and plans you have in life should be flexible. Like in chess, not all of your plans and strategies work the way you want, life also has the similar pattern. You decide to move a horse in lieu with Queen and trap the opponent’s King in the mid way. But the opponent also plays some trick and you are left with no other option but to move horse n queen someplace else to trap the King.

Similarly, you decide to do some things, plan a career path and march your way towards it. But what happens in most of the cases is, even after taking the desired education you end up doing some work which is not exactly related to your educational qualifications. But you have to go ahead with it (be flexible with the plans) and mould a new plan, strategy or career path.

Having said this all, I by no means say that we should not make mistakes. Mistakes are the learning steps. We won’t learn unless and until we make mistakes. But make sure not to make the same mistakes many more times (not just twice). I am saying many more times because I know it’s NOT possible to make a particular mistake ONLY TWICE. You are bound to make many more similar mistakes and the set back you face by making them many more times makes you remember the mistake in future.

And be flexible, if one strategy fails, go for another. Always have a plan B, as they say. Try to see the silver lining in every crisis. You never know you might find an Oasis in a desert all of a sudden. Never give up 🙂

4 thoughts on “Life Is A Game Of Chess…”